COVID-19 is having a far-reaching effect on global economies, but that doesn’t mean that everything is shutting down. Instead, much business activity is being done via digital platforms, and that is especially true of the aircraft sales and leasing market.

That means business keeps going, and aircraft valuation needs are still extremely important in making the best aircraft arrangements for yourself and your organization in this volatile market.

In mid-March, the level of discounting from Current Market Values is significant with lease rates impacted to an even greater extent. All of this discounting can lead to increased amounts of aircraft sales worldwide as financial institutions treat aircraft as a toxic asset class.

What can you do to protect yourself, your organization, your fleet value?

Spend an hour with Paul Leighton, editor of Aircraft Value News, and founder of The Aircraft Value Analysis Company, to get insights into the current state of the aircraft valuation market. The following topics will be explored:

Please join us as we explore the intricacies of today’s aircraft market.

Paul Leighton is editor of Aircraft Value News, and founder and managing director of The Aircraft Value Analysis Company (AVAC), a U.K.-based company founded in 1991 that specializes in future value forecasting.

Paul has been undertaking appraisals on commercial aircraft and business jets for nearly 30 years for a wide range of clients. He holds a B.A.(Hons) in International Relations & Politics and has Master of Science degree in Air Transport Management from the College of Aeronautics at Cranfield University. After starting his career at British Aerospace, Hatfield, Paul joined a national airline in Australasia. Prior to forming AVAC, he worked for an aviation consultancy company in the U.K. Paul has made a number of presentations at conferences, including at the International Society of Transport Aircraft Trading (ISTAT), and has been guest lecturer on future value forecasting at Cranfield University. 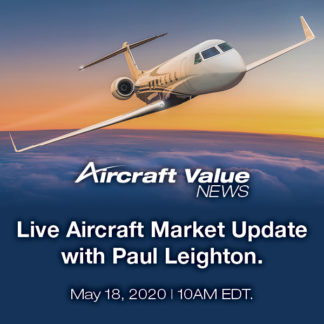